The government yesterday advised Cambodians working and living illegally in South Korea to return home to complete legal documents and apply to work there again.

Labour Minister Ith Samheng said yesterday that he believed there are not too many Cambodians working illegally in South Korea.

“Almost all our workers in South Korea are legally there,” he said. “I appeal to those who are illegally there to return home and go back to South Korea through the government-to-government employment permit system.”

Mr Samheng added that there are nearly 60,000 Cambodians working in South Korea and estimated that only a few hundred are there illegally.

“We do not have the exact number because the undocumented workers often hide from authorities,” he noted.

Earlier this month, the South Korean Immigration Service issued an ultimatum to all undocumented workers to leave the country within six months or face legal action. 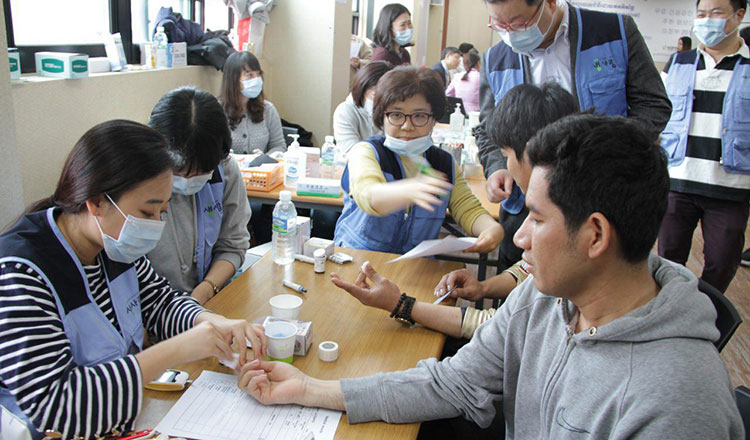 It said the South Korean Justice Ministry will reinforce measures against illegal employment in industries such as construction and adult entertainment.

“[Undocumented] foreigners need to voluntarily leave the country by March next year,” it noted. “You will not be subject to [a blacklist], regardless of overstay period.”

The South Korean Immigration added that those who failed to remove themselves from the country by March are subject to be barred from entry for up to ten years. It said that anyone caught in a crackdown would be deported immediately.

Dy Thehoya, a programme officer with the labour rights group Central, said on Tuesday that the Cambodian embassy in South Korea has to protect Cambodian workers regardless of legal status.

“The Cambodian embassy should inform our workers in South Korea so that they know about what to do in order to avoid problems with the South Korean authorities,” he said.

Cambodian workers in South Korea earn about $1,200 per month working in the agriculture sector, while those in the industrial sector earn up to $1,800 per month. About $300 million are annually sent to relatives back home.